The Pacific Coast Air Museum had just two aircraft on display when the Navy called in early 1993. An old war plane needed to be moved, and the military wanted the fledgling Santa Rosa museum to pick it up.

"I remember saying to somebody, 'I hope it's not that old airplane on 19th Avenue,' "remembers Lynn Hunt, a museum board member who was there.” And it was. In even worse shape than we remembered."

The airplane-turned-play structure was a mess, covered with graffiti and latex paint with concrete poured in the cockpit - far beyond what board members thought they were capable of restoring. The museum said "no thank you" to the Navy, were asked again, and said "no" a second time. Less than a week later, an official at the National Naval Air Museum in Florida gave them an offer they felt they couldn't refuse.

"They begged us to take it," Hunt says. And they implied "that it was in our best interests to take it."

That was the beginning of a happy ending that most locals never learned about. While other lost landmarks of the Bay Area are long gone, the F-8 Crusader is doing just fine, a 45-minute drive from its former home at the Sunset District's Larsen Park playground.

After more than 15 years on display, the war plane is in a hanger, prepping for its second restoration. But it's still the Hellen Mirren of aircraft; nostalgic adults who played in the cockpit and scampered through the corrugated metal exhaust pipe as children will discover it looks even better with age.

The F-8 Crusader was the third Navy-plane play structure in that park, and the most memorable. The versatile fighter-bomber was delivered to the Navy in 1960 and logged 3,281 hours of flight time, much of it on aircraft carriers. It was delivered from the Alameda Naval Air Station to the Sunset District by helicopter in 1975. City workers outfitted the Crusader with a slide and skewered the exhaust vent with a corrugated metal pipe, turning the body into a kid-friendly crawl space.

Children loved the play structure, which was visible from busy 19th Avenue at Vicente Street. But in 1992, the San Francisco Rec and Park Department declared the plane a lead-contamination hazard, and weren't willing to pay the $30,000 to $40,000 clean-up price. The plane became the Navy's problem again. And the Navy made it the Pacific Coast Air Museum's problem.

"We didn't really want it. It was too big a job for us," said Dave Pinsky, the museum's current executive director. "We were a small museum at the time, we had one or two airplanes. The expense and the effort - we didn't even know if we could restore it."

The museum removed the F-8 Crusader with a crane, and two 40-foot flatbed trucks for the body and wing. They thought the landing gear had been removed until they started digging, and found the wheels in great shape after being buried in deep pits for nearly 20 years.
"It had the same tires that are on it now," Hunt says. "We put air in the tires and they held air."

It looked like a picked-over carcass when it arrived at the museum, but the all-volunteer restoration crew was up to the challenge. The concrete in the cockpit was jackhammered, and the sand below it was removed with industrial vacuums. One retiree spent hours every night grinding down the latex paint to get to the metal skin. The nose cone was missing; a half watermelon became a model for a fiberglass replacement.

Meanwhile, the Navy was true to its word. A few weeks later, another official called with good news. Hunt remembers: "He said, 'I've got a present for you, in the form of an A-6 Intruder. We'll deliver it, land it in Santa Rosa. It's your airplane.' "

A few months later an F-14 Tomcat arrived, followed by an F-16 Viper, which was flown into the museum and put on display 30 days after it flew last mission for Topgun at Naval Air Station Miramar. "That 19th Avenue was the beginning of a great relationship with the U.S. Navy,” Hunt says.

The museum now has an impressive collection of 30 aircraft, including a solemn piece of history - the F-15A fighter that was the first responder during the Sept. 11 attacks.

As years passed, many locals assumed that the 19th Avenue plane was hauled off for scrap. When a Chronicle reporter inquired about its fate a few years ago, a Rec and Park Department official reported that it had been destroyed.

But the museum officials say it has become one of their most popular attractions. They say it's a common sight to see a grown man or woman have an emotional reaction seeing the plaything of their youth. Whatever initial headaches the plane caused, it has more than earned its keep.

"We did not anticipate that," Hunt says. "We knew it was a landmark, and we did see the positives of keeping it local. But I don't think any of us at the time envisioned that people would care about it so much."

Right now the fighter plane is under a hanger, undergoing a slow renovation that could last years if a sudden infusion of cash doesn't come through. Volunteers will carefully restore the aluminum frame, which has been corroding from the inside. But the paint job alone will cost a few thousand dollars. Donors can specify that they want their money to go to the 19th Avenue plane.

In the meantime, Pinsky says the museum staff is happy to escort nostalgic Bay Area residents to the Crusader - as long as they call ahead to make sure the staff is not too busy. Twenty years of kids pounding on the frame ensured that it's not the most pristine F-8 in the United States.
But it just might be the most beloved.

"Ours is a little rattier," Pinsky says. "But it has its own special identity."
Scott Rose 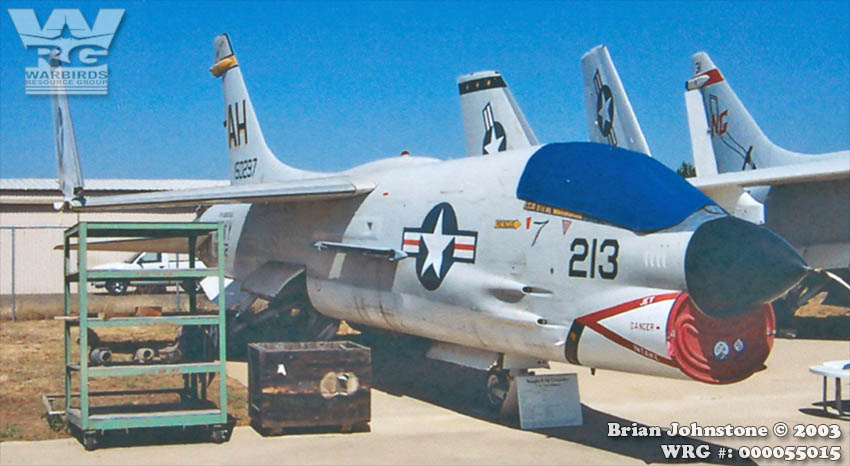 Anybody know the Serial # of the F-8 Crusader nose at the Savigny museum in France?
steve dickey

Scott, don't forget the ones I sent you from the Philippines!!
Wilson

I forgot to mention, the article I posted above pertains to BuNo 146995 in the first photo. To fill in the missing information from the Warbird Registry:

Please be sure to credit Rob Rohr for the following pics and info. 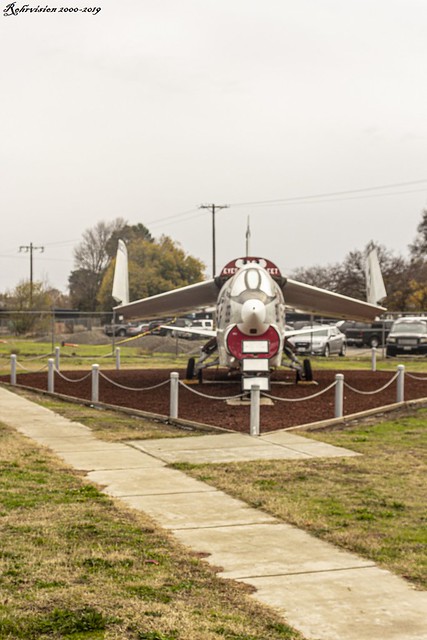 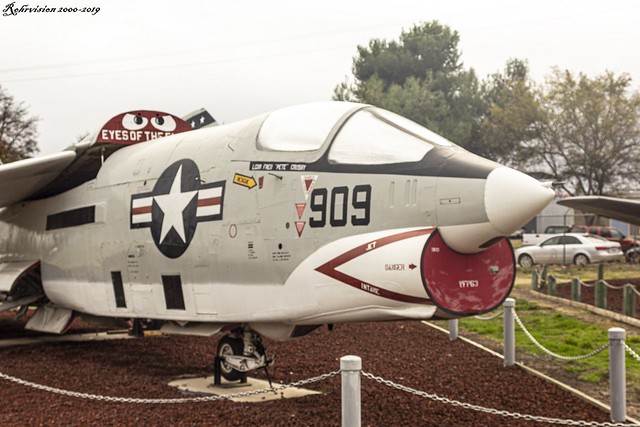 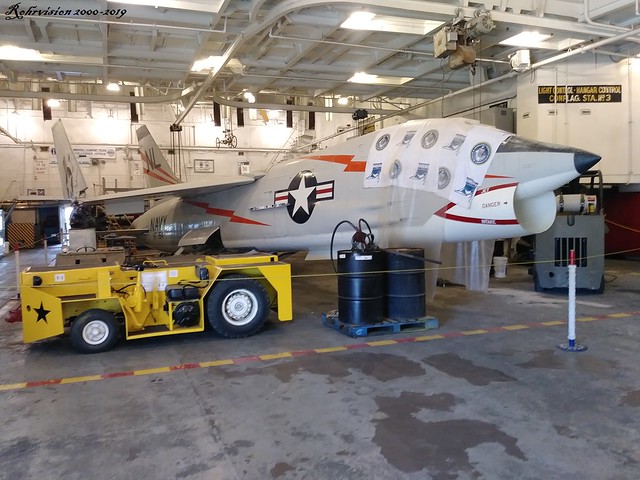 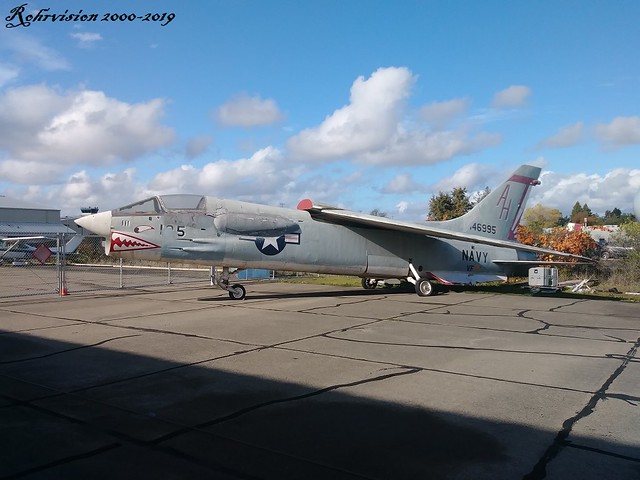 Rob also reports that the F8U on display at Savigny-les-Beaune Museum is Bu# 151766 painted as French Navy #36.
Post a reply
Switch to full style