Switch to full style
This is the place where the majority of the warbird (aircraft that have survived military service) discussions will take place. Specialized forums may be added in the new future
Post a reply
Fouga23

Thanks for taking the time to answer my questions!

Don't worry Chris, Accurate paint is the rule. She will be matte, flat and non specular just like she was out of the factory. I don't think she will have any personal artwork as she likely never did with only 7 hours before she went to storage. A plain paint scheme but correct none the less.

Rick Turner is an avid aviation historian whose family has a long history in Warbirds. His Father owned many Warbirds including PV-2D 84059. He was kind enough to send me a photo taken shortly after they bought the aircraft. Rick was the one who told me about the last three digits of the bureau number being painted on the nose.
Our Harpoon will have 062 on the nose along with a white radome just like Rick's Harpoon did.

Thanks for this info, Taigh, what you described here is just the best solution for this aircraft, very nice and clever approach

I can't wait to see this Harpoon back in the air repainted this way !!!
PJ

Rick Mellor__a book that you might want to check out is Classic Warbirds Number 8 Pacific Twins. It is published by Ventura Publications. Lots of great photos of Australian and New Zealand PV's-U.S. Navy. too.

Rummaging around in my files, I've come up with a couple pics you might like to see ...

(There may be more to come, too--there's a whole heap of these things to pore through)

Second, one of the only D-model pics I've got. It's a scan of an old, faded, small snapshot. Possibly at Olathe, but I don't know for sure. Looks like this plane may be waiting to be de-milled--it still has its pylons.

And here's a shot of what appears to be a flight of very fresh Harpoons in the skies of California. They are so new, the paint is hardly dry.

Finally, a shot of what appears to be your overall non-specular blue scheme, but with the aircraft in a configuration you won't want to see (I think this is a Fleet Air Wing Four Ventura, after a mishap):

Note that nose numbers weren't always BuNo-based, although sometimes they obviously were. Numeral colors could vary according to the flight to which a plane was assigned. Numbers on the aft fuselage might not match the numbers on the nose. Navy squadron markings can be pretty arcane, and sometimes you have to wonder if there's any rhyme or reason to it.

Anyhow, I'll see what else I can find, but this is something to look at for now,
Taigh Ramey

Thanks for the great photos Jen. Great stuff, please keep it coming. 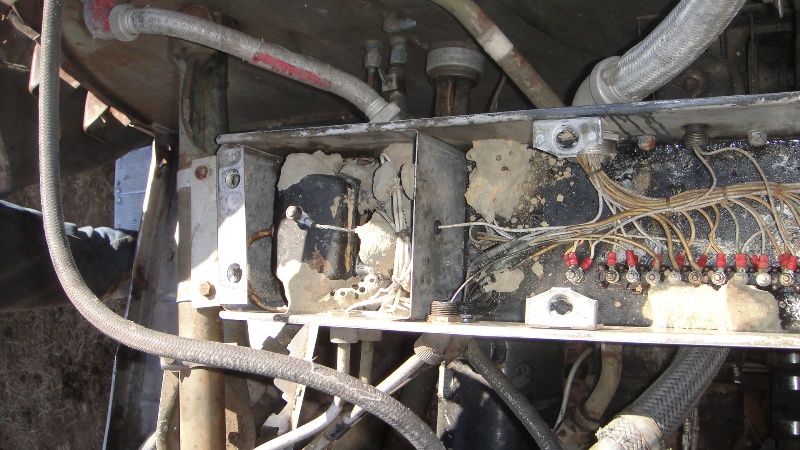 And not a foot away, on the other side of the firewall, another electrical J box looks like it left the factory yesterday: 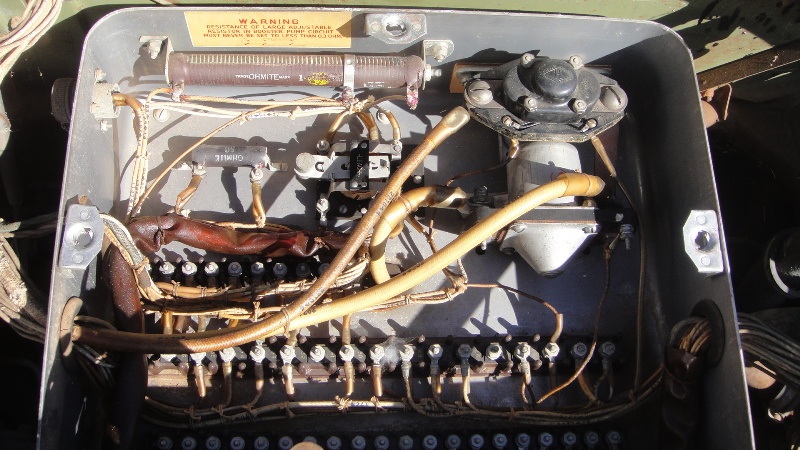 This is Cade who is working on pulling the left carb for overhaul about a month ago. 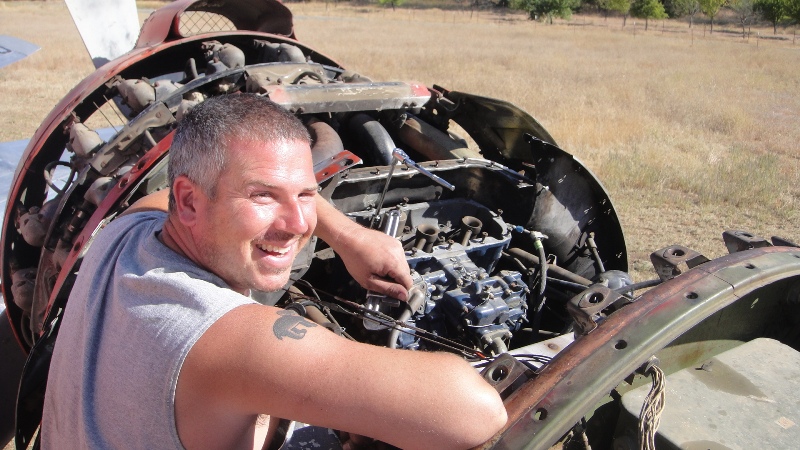 When we were pulling the carburetors we found that the gasket for the left main fuel feed tube (from the carb to the blower housing) was installed incorrectly and was restricting the fuel flow.

Steve asked me to take the carburetor from him. I said wait a minute while I take a picture, Funny how he can cuss me out and at the same time smile for the camera! 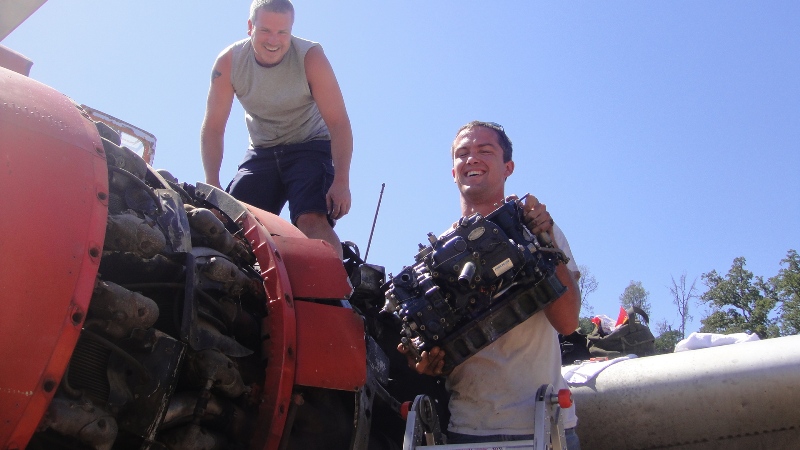 Taigh and crew;
Thanks again for the efforts you put in on this recovery and especially for all the thought that went into the multiple video camera angles and still photos. It really makes for an exciting adventure for those of us who were not a part of it.
Your efforts in recording the event has brought it to life for all of us on the side lines.
WELL DONE!
Jerry
corsair166b

I gotta say, hot on the heels of last week's fantastic PV-2 story about the old guy seeing and flying in a PV-2 up at Geneseo that I passed on to my father (he said he was in tears by the end of it), I told him he should take a look at this thread to see the OTHER side of the story.....not only does what we do reinvigorate the old boys who flew in and operated these great planes, sometimes the story is reversed and we get lucky enough to find an old girl like the one you found here and we get to save her, too. I have yet to hear back from him about looking at this thread, but hopefully he'll find it as interesting as all of us have. Good luck with her, I know you'll do her up right.

Taigh and crew, Job well done! Thanks for the pictures and video. I am happy that the flight went well, and you have your bird at home now. Welcome to the H.O.G. fold...I just got my decals in, I'll get you one mailed out soon.

We flew Dave Hansen's PV, Attu Warrior from Colorado Springs to Midland, Tx. for the CAF Airshow last Tuesday, and AW sang a beautifully on the 4 hour flight...wish I could have stayed....Dave said that they flew AW in the airshow yesterday, and the Old Girl is getting some well deserved attention...

I have been wracking my brain, trying to find a way to get AW and Hot Stuff together for a formation flight for quite sometime....now look what you have done....Now I gotta figure how to get three Harpoons in formation....Can I get a little help here???

As for the drop tank pylon....them's fairly hard to come by....Dave has one, and the other side is a mirror of it...I bet you could get him to fabricate a set. Be nice to see a couple of sets made to help defray the costs...

Keep up the good work and two running threads on Harpoons, I bet will not be frowned upon by us WIX'ers. Are you planning on having her in the air and touring next year? 100th year of Naval Aviation ya know....might make it a step closer to see more than one Harpoon in the air at once...

This is really a dream story come true. Congrats on the plane and bigger pats on the back for flying her outta there. I am only across the bay and really need come and see you and the great aircraft that you have. When I see at dream machines I think how great of an aircraft you got. I hope to come and meet you soon. Keith G
JBoyle

Thanks for the photos...she looks to be in very good shape considering her long term parking..

A stupid question (probably bordering on "Duh!!!" but here it goes)...
Did it have factory corrosion proofing (since it was a Navy plane and would have been operated in salty environments)?

If so, in your opinion, did it help preserve it?

BTW: if you're looking for paint suggestions, there is a great photo of a beautifully clean Harpoon in 3-tone camo in Francillon's Lockheed Aircraft since 1913, published by Putnam in 1987.
Taigh Ramey

I firmly believe that the amount of corrosion control used in Navy aircraft especially this Harpoon contributed greatly to its present condition. The other major factor, in my mind, is the fact that for the last 16 years it was stored in a fairly dry climate in California. Just over one hill to the South of where the harpoon was parked is the Napa and Santa Rosa valley where there is a lot of fog. If the Harpoon had been stored a few miles away I think that it would have made a big difference and I doubt that we could have flown it out. There is a Harpoon, from the same batch, at an airport not far from Napa and the engines are very stiff and I can see a lot more corrosion as well.

Dry climate sure makes a difference which is why the best aircraft storage facilities are usually found in the desert.

The biggest issue for our Harpoon is that the local ground squirrel population used the airframe for a high rise condominium. I need to pull the leading edges off of the wings and horizontal stabilizers and do a thorough cleaning inside the airframe especially before this winter. This is one nice thing about the Harpoon. They had heated leading edges for deicing (very advanced for the time) and they are held on with hundreds of screws. I can remove the leading edges from the fuselage to the wing tips which gives great access for cleaning, inspections and subsequent corrosion protection. There weren't many aircraft built in WWII that had leading edges that you could remove so this is a real treat from a maintenance and preservation standpoint.

There are some great shots on Indyjen's Hot stuff thread of removing the leading edges on the horizontal stabilizers and wings for inspection. Here is the link to page 23 of Hot Stuffs thread showing the removal and inspection. It goes onto page 23 too. Great stuff Jen

Taigh Ramey wrote:and they are held on with hundreds of screws

What Lockheed A/C didn't have items held on by hundreds of screws.
I think they held stock in hardware companies.
Kdmoo

Rgr that!
Post a reply
Switch to full style